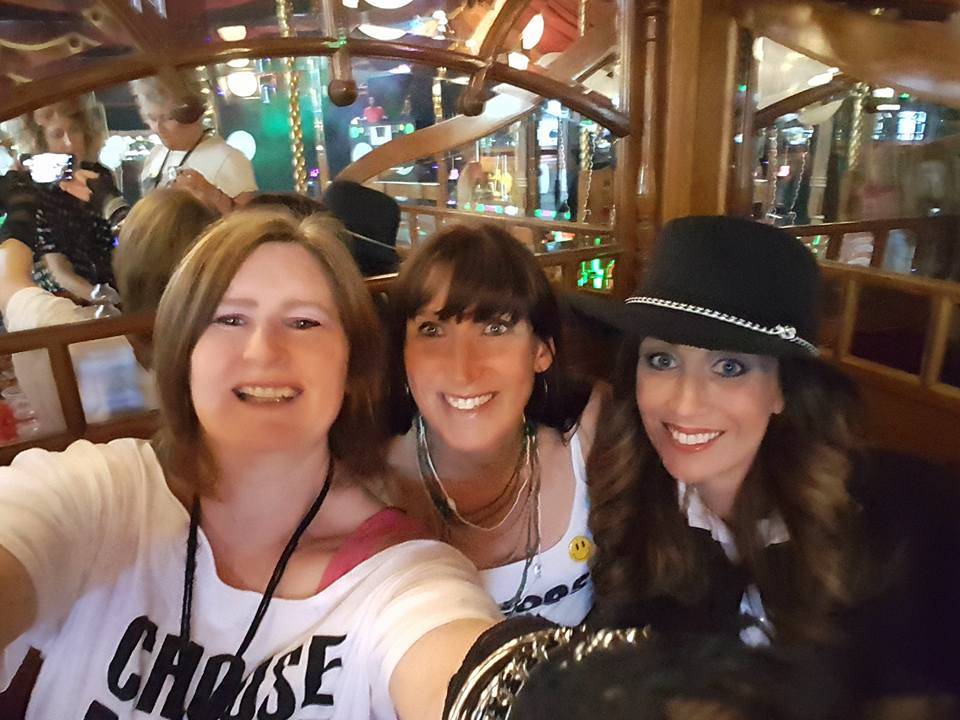 A week ago, me and my crew descended onto the Newcastle-Gateshead Quayside ready for a great night out. We were all up for it. Getting together in the middle of the school holidays is always a treat when we’re not seeing each other as regularly as normal. We’d all been preparing: this was an 80s night and we were all representing the 80s in one way or another – plenty of George Michael CHOOSE LIFE T shirts, a couple of Madonna influences, even a Michael Jackson suit and hat combo…

We had no idea what to expect. We’d never attended a QFestival event before. We had no idea what a Spiegeltent was. And from the outside, this tent, this wooden structure, looked decidedly unimpressive. I couldn’t help wondering ‘What on earth have I brought everyone to here?’. It had been my idea and I felt some level of responsibility. Nestled between the imposing structures of the Sage and the Baltic, this plain wooden construction seemed small, uninviting, insignificant.

Let’s firstly take a step back and ask ‘What is a Spiegeltent?’ I’d asked myself this question before signing up to this event and was intrigued by what I found out. Spiegeltent is Dutch for ‘mirror tent’. A Spiegltent is a large travelling tent, constructed from wood and canvas, decorated within with mirrors and stained glass. Originally built as an entertainment venue in Belgium during the late 19th century, only a handful of these Spiegeltents remain in existence today – and we had the privilege of having one right here, on the Gateshead bank of the river Tyne! I felt inspired by the description of this venue, drawn to see what it was all about, and yet, as I stood by the Millennium Bridge looking at this dated, undecorative structure, I couldn’t help but feel underwhelmed and more than a little apprehensive. 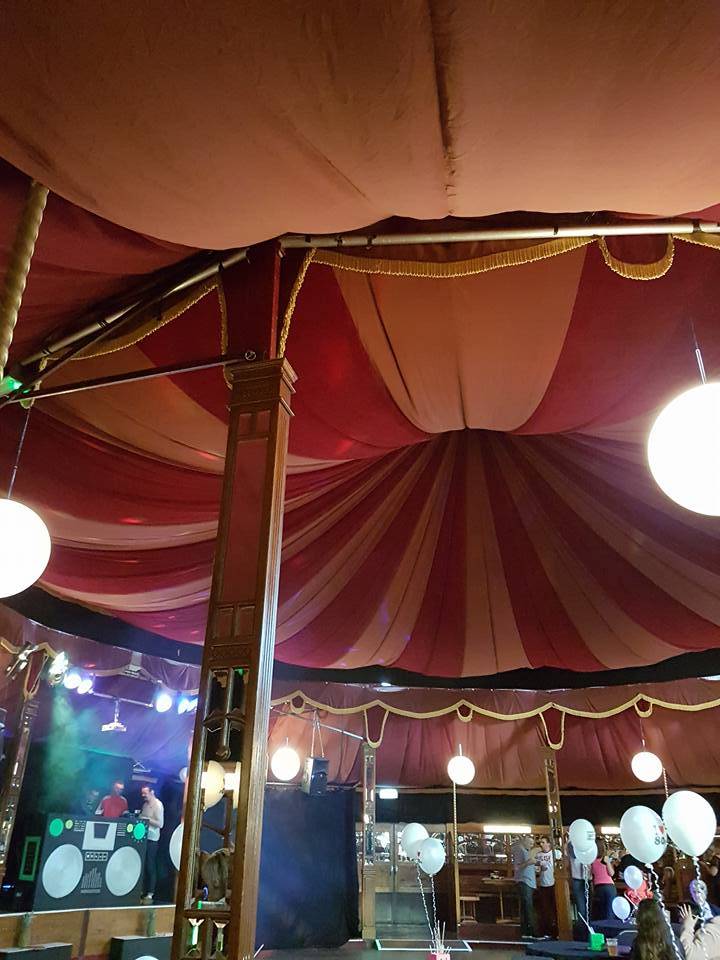 And then we stepped inside. I left my doubts at the door and smiled. Oh yes, this was what we had come for. This was going to be a good night. I felt as if I was stepping into a TARDIS – something small and uninspiring on the outside became a whole new glorious world on the inside. I walked around in awe, taking in the beautiful wooden floor and the glittering mirrors on every column, the sumptuous burgundy silk ceiling drapes which rippled in the breeze. We were no longer in Gateshead, but were transported into a magical venue, many miles and years away from our daily lives.

This was a travelling tent. This tent had seen the world through the decades. This tent had a sense of history that was trapped within its circle of influence. And here we were, adding another tale to to this unique chapter of tales. 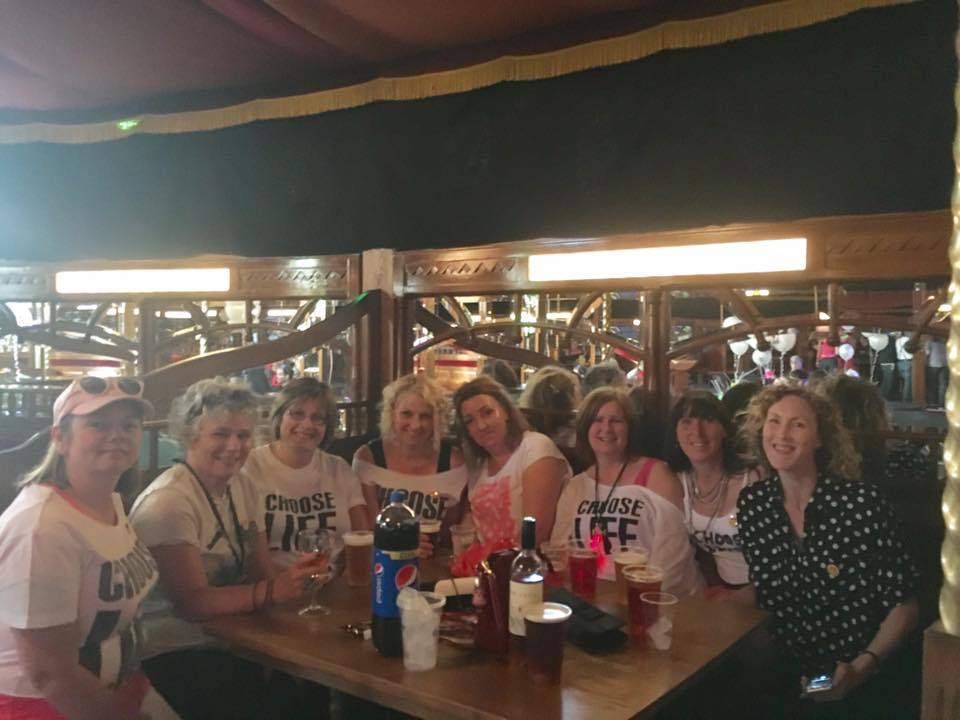 As we all squeezed into a wooden booth designed for a smaller group than we were(!), we slipped back into the 80s with glittery make-up, glow sticks, smiley face badges and the occasional pineapple (I know, right – who knew pineapples were a symbol of the 80s?). This entertainment/culture team had thought of everything. Other groups had turned up for a good night out too – complete with ra ra skirts, leg warmers and an inflatable boombox, no less. Everyone was there to dance – right from the start, people were giving it all on the dance floor, losing themselves in the experience, drifting back into being the person they had been more than thirty years before.

As Helen H commented on Facebook the next day –

There was a moment tonight , listening to Right on Time, where I was a teenager. Completely taken back in time , no kids, no responsibility. Just the singing and the dancing. I nearly cried ❤❤❤

Music can do that to a person. It’s powerful that way. The ten of us there that night hadn’t known each other way back then, but we were comfortable enough together to allow ourselves to revisit those times, each in our own bubble and yet supported and loved by each other.

For me, the tent itself contributed to the magic of the experience. In having such a history, it became timeless. The tent was firmly erected on familiar territory in the here and now, and yet the interior drew us away from that, back in time, back into memory, back to when we were just starting out on the journey that led us to where we are today.

And yet that past is not as you left it. You’re holding up a mirror to what was, to your younger self, and it’s filtered through all that you’ve been through along the way.

The present changes the past. Looking back, you do not find what you left behind.
― Kiran Desai, The Inheritance of Loss

So thank you, Spiegeltent, for this glimpse of who I was and who I am now, what has been and what is to come.

I can’t wait to visit you again.