Freedom, flow and focus. Those three words jump out from the Homepage of Mallory Smith’s website. Mallory Smith: Life and Career Coaching, Reiki and Emotional Freedom Technique. She also works in partnership with Jan Etoile, offering creative group coaching workshops under the name You Can 2. Have a look at her websites if you’re interested in finding out more. That’s not what we’re here for. We’re here to find out more about Mallory herself.

Helen H suggested that I pay Mallory a visit. She knows her from choir, knows her from a distance, but knows her well enough to appreciate that there’s something very special about her.

What I love about Mallory is that she never looks on and thinks ‘That could be fun.’ She jumps right in. She just gets on and does it. Whatever it is. Nothing stops her from having a go.

She’s right. As I sit in Mallory’s living room listening to her, I’m fascinated by the freedom, flow and focus in her narrative. Let me tell you some of her story and I think you’ll see what I mean.

Mallory travelled a lot as a child because her father was in the Armed Forces. By the time she was 14, she was living with her grandparents in the North East and travelling out to Libya on Forces transport for holidays with her parents. She’d always had an interest in dance and so when she got the opportunity to go backstage at a performance of the London Festival Ballet, later to become the English National Ballet, she jumped at the chance. The company were looking for help in the wardrobe department for the tour and Mallory’s aunt was the only one in the group old enough to apply for the job. Later, when Mallory was at university in London, she would help her aunt out in the maintenance wardrobe. She loved the atmosphere and being part of that world and soon was working there full time herself. She became a touring wardrobe assistant and later shoe supervisor and travelled all over the world with the Company. She loved it. The Wardrobe was the hub of the whole place: where the dancers would come with any problems with costumes and any problems of their own to chat about over a cup of tea. Mallory was good at listening, but after about seven years, she recognised how self-focused and transitory the dance world was and felt that she needed to put down some roots. It had been great while it lasted and she’d made lasting friendships but it was time for a change.

In 2003, Mallory underwent surgery for a prolapsed disc in her neck: a discectomy with fusion. Soon after that operation, the next section in her neck gave way. She’d also been suffering with cartilage issues in her right knee. Other colleagues were covering her work while she was waiting for her second operation and there was a restructuring going on in the service and jobs were being lost. In 2008, Mallory offered to take redundancy. She was 55. She was never worried about how she would fill her time or what she would do. She’d been interested in life coaching and counselling all her life in a very informal way. She was a good listener. She’d been on holistic holidays and developed an interest in Reiki.

At a time that I was stressed at work, I decided to search ‘holistic holiday’ on my computer and the very first one that came up looked great. So I booked up and went! I was married at the time, but signed up to go alone. I flew off to the island of Skyros with no idea what to expect, but hoping for some massage. When I got there, there was no massage on offer, nothing I’d really heard of, so I tried Reiki and loved it. So I started training in Reiki and now I’m a Reiki master.

Back home, Mallory was involved behind the scenes and in productions at the Tyne Theatre. She’d missed being involved with the theatre and so had been invited along to the Tyne Theatre by a friend for what she thought was a tour, but when she arrived, she was given a seat and some music and just decided to join in. When the Tyne Theatre changed hands, Mallory missed singing. She saw an advert for SingLive! and just went along to give it a go. Later on, she was involved as The Sage Gateshead’s community choir emerged with Gary Griffiths as conductor and artistic director. She was involved right at the start and as a new name was chosen. And now, she’s involved as rehearsal manager. She loves how Gary choreographs the choir. Because no one uses books for the performance, everyone’s eyes are glued on Gary and he can do whatever he wants and they will follow.

Inspiration is hugely important for so many people. Singing is good for you, we all know that, and you can actually only actively worry about one thing at any one time, so when you’re focusing on singing, you can’t think about anything else. It’s great escapism.

Mallory doesn’t see anything remarkable in how she has lived her life. But there is a pattern emerging, isn’t there? Mallory doesn’t really seek anything out. She has no fixed plan. In fact, she admits she’s not a fan of fixed plans. But when something comes up that she likes the look of, she dives right in. When she fancies having a go, she does just that. She has a go. 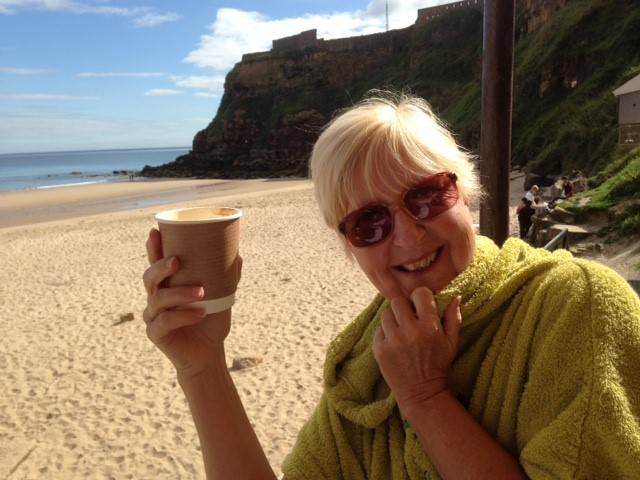 Like swimming, for example. Cold water swimming. Freezing cold water swimming at times. Mallory lives at the coast, you see. As her sixtieth birthday approached, she began to wonder what she should do to mark the occasion. And swimming in the sea came to mind. So she went for it. Alone. Having never swum in the North Sea in living memory! She got up early on her birthday and made her way down onto the sand at 7:30am. The beach was deserted. It was mid September and the sea looked gorgeous. It had been a lovely summer. Mallory got undressed and dipped her toe in the water. It was freezing! She looked around. No one was watching. She told herself ‘You really don’t have to do this.’ And put her tracksuit back on again. Just at that moment, a man ran down onto the beach in bright orange shorts. He ran past her towards the water like someone out of Baywatch and plunged straight into the water. It was enough. Inspired, she took her tracksuit off again and followed him into the waves. She managed ten minutes on that first day. But since then, she swims in the sea every day in the summer and now that she has discovered flesh-coloured neoprene gloves, it’s pretty regularly in the winter too.

I love it. Nothing beats it. Being in the water as the sun rises is like a meditation for me. It reminds me of my place in the universe. It’s a constant and yet it’s never the same. I go down onto the sand and know that no one has ever stood on that sand before me. It’s all washed clean every single day. It boosts the immune system too and there’s a group of us who meet up down there sometimes.

Don’t be fooled into thinking that everything has come easy to Mallory. She still struggles with lack of mobility in her neck and arthritis in her knee. There are things like yoga and tango that she would have loved to have done and has had to let go of. And at the moment, Mallory is struggling to make sense of world affairs. She knows that fear doesn’t help but she looks around the world and sees how the planet is stressed and how people are stressed and that distresses her. And so she’s working out her place in the world, her particular role. She’s trying to stay in the light and be a light worker. She’s trying to find peace in her own contribution, trusting that there are other people out there that can do all the things that are needed that she can’t do.

Freedom, flow and focus. Think about those three words again. These are the words that sum up Mallory’s life for me. She’s lived with a sense of freedom to do what is right for her, free from the expectations of others or the fear of what others may think. She’s gone with the flow and seized all the opportunities that have crossed her path. And she’s developed a focus that helps her to know what she wants and go for it without distraction.

And so Mallory Smith, you may not think you’re inspiring, but we do. I’d like to say we’ll join you for an early morning swim one day, but I’m not sure we’re anywhere near as brave as you!