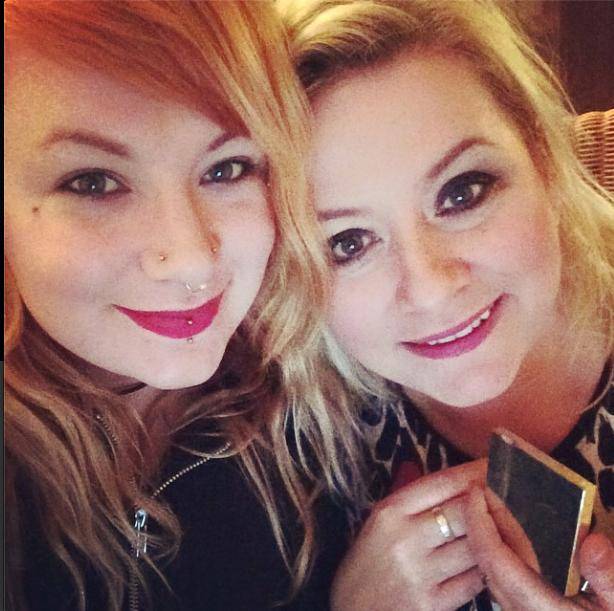 Right from being young, Jude always dreamt of having a huge family. All gathered around a massive wooden dining table. Waltons style. You get the picture.

She’s always had a caring heart, you see. A big heart. She’s worked in ‘Care’ all her life, right from the age of thirteen when she worked in an old people’s home. At 18, she moved to America for 6 years, where she worked in a Special Needs School. When she returned to the UK to get married, she was a nanny for a while, then had jobs in various residential care homes. She has worked as a Day Centre Officer for Gateshead Council for over 20 years.

Anyway, back to the huge family. She had a short marriage to her first daughter Laura’s dad and then lived with her second husband, Ellie’s dad, for 9 years. They’ve been separated for 9 years. Her pregnancies were far from straightforward and she had lots of gyne issues (that we won’t go into), which resulted in her having a hysterectomy at just 36. So no more children then.

So how did it feel to let go of the dream of having a big family at that point?

To be honest, I still believed the big family would happen. I’d always been open to the idea of adopting or fostering. I’m not at all academic but I knew that being a mum was something I could do. Do well even.

Jude and her husband went into fostering together, but after a year, he realised it was not for him. That left Jude with a hard decision to make. She knew that this was what she really wanted to do – with or without her husband. So now here she was, a single mum and a foster carer.

And then, when her daughter Laura was 15, Jude found out that she had been self-harming for some time and had all sorts of anxieties and issues that Jude knew nothing about. Laura had been making videos about it all for Youtube since she was 14 and was gathering quite a following.

So how did it feel to find out that Laura had these issues?

I suppose I felt guilt first of all – what have I done to make her like this? And then I tried to carry on like nothing was happening. Self harm wasn’t really talked about then. I didn’t tell anyone except my mum. I didn’t get help. My advice was pretty much ‘Get over yourself’, which looking back, was not the best advice in the world.

So the one thing that Jude believed she was really good at – parenting – was now being called into question. Laura herself would say that Jude ‘didn’t get it back then’ and when people tell her how lucky she is to have such a supportive mum, she wouldn’t hesitate to say that it hasn’t always been that way.

When she was 16, Laura moved out to live with Jude’s mum and dad. And Jude’s over-riding emotion at the time? Relief. It was what they both needed. A bit of space from each other. They loved each other, but couldn’t live together. The two developed a better relationship.

When Laura was 18, Jude took her to Thailand to get a nose job. No one understood.

So how did it feel to be judged as a parent?

I was judged so much for that. Only I knew how much Laura wanted it. How she’d been begging for it for years. How much research had gone into the decision. My mum understood. The people who really mattered knew and understood the reasons. I had to ignore the rest. I had to do what I thought was best for my daughter. I found the courage to do it and deal with people. And it did really change Laura’s life. She was much happier afterwards.

So how does it feel to have your own daughter talk so openly to so many people about such personal issues?

I was scared for her at first. Worried that at such a young age, she was giving advice to so many other vulnerable young people. But it’s been OK. I don’t watch anything she doesn’t want me to. I always ask her first and if she doesn’t want me to, I respect that. So there’s a lot I’ve never seen.

So back to Jude. This extraordinary woman. This honest, fun-loving, creative woman with a big heart who welcomes teenage girls with challenging behaviours into her home when they have nowhere else to go. Who’s committed to helping them turn their lives around. I know, because one of these girls was my child.

She’s had nine foster children in her care (only one was a boy and he only was in placement a week). Each one has a special place in her heart.

So how has your work as a foster carer affected your girls?

Ellie was only 7 when we started and she was really jealous at first. She thought the fostered child was just there to play with her and she would make sure they did! But it has changed them in a good way, I think. Made them stronger and appreciate what they have more. It enriches their lives and helps them to make better decisions.

And so Jude, here’s the big question, the final question – are you extraordinary?

No, not at all. What I do is just normal to me. I’ve found the thing I can do. The thing that makes me happy – most of the time. Caring for kids is instinctive. I guess I’m pretty non-judgemental and that helps. I have a strong urge to care for and nurture these girls. I just want the best for them and I will fight for that for them if I have to. I have good support from my mum and dad. They are always there for me. And I can honestly say I have never ever regretted it. OK, so I’ve learnt over the years that I’m not Mrs Perfect. I’m not the perfect mum. But I do the best I can. That doesn’t make me extraordinary, does it?