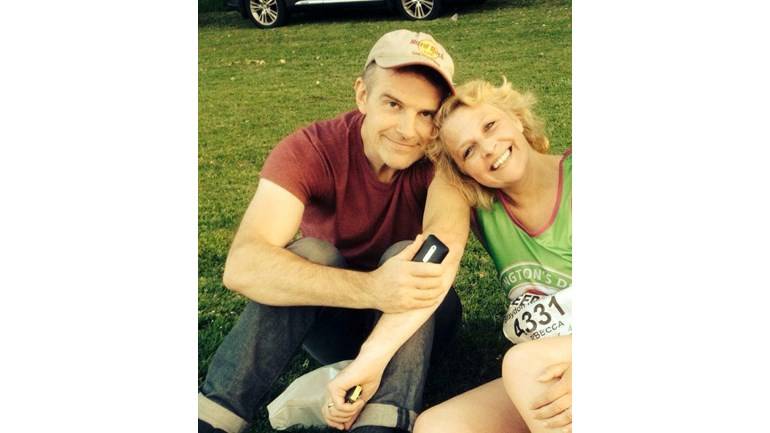 My husband Chris was diagnosed with Huntington’s Disease in 2014. Huntington’s Disease is a degenerative neurological disorder affecting thinking, movement and behaviour. ‘HD’ is an illness which changes everything. As a family we are learning about living and loving in new ways, some painful but at times joyful too. Knowing that we are not alone and we have the support of the ‘Huntington’s Disease Association’ really helps. There are exciting developments and new treatments being tested all the time and we have had the opportunity to be part of these groundbreaking studies in this last year… I sat in comfort and watched the GNR at home last year, it’s such an emotional, good spirited local event and I couldn’t think of a good enough reason not to take part this year to help raise awareness and some much needed funds. I’m hoping to complete this whole half marathon with good friends and good cheer – however long it may take!

This was her story on her JustGiving page, through which she raised over £1500!

For the last 16 years, Becky has worked for the Gateshead Young Carers Team, which supports young carers aged 5-25 in the area emotionally and practically. The Team organises social activities to give these young carers a break and time to enjoy themselves. These children and young people may be living with and caring for a parent or a sibling with mental health issues, long term illness, drug and alcohol misuse or physical disability. Sometimes support is needed through a bereavement. Becky goes into schools to offer counselling and support around various mental health issues, often including low self-esteem and low confidence.

Through her work and her training as a counsellor, Becky knows all about the importance of self-care. But how much harder is it when you yourself are the one in need of self-care?

It’s really helped me every step of the way to have the background and knowledge that I’ve gained over the years. This is such a slow and progressive illness and so we are having to deal with gradual change. From my training, I know how important self-care is and so part of accepting that diagnosis back in 2014 was a commitment to looking after myself.

So how does Becky put self-care into practice?

But let’s return to where we started, to the Great North Run, because running has become an important part of Becky’s life. Surprisingly for her.

She was inspired to give running a go when she was consciously undergoing a year of challenges and pushing herself to try new things. Things she didn’t really believe she could do or even wanted to do. Running fitted that description! She saw I was starting a group for Reluctant Runners and signed up. It was a good fit for her. She loved the fresh air and connection with nature. It made her feel fully alive. She was able to open up and share stuff she may not have been able to do face to face across a table with someone.

She entered the Blaydon Race with me on 9 June 2015. It was the first time she’d publicly told their HD story and it was almost like a public statement – it somehow made it easier to talk about with the link to running. On the day of the race, everything was a blur. Becky felt under enormous pressure with all the money she raised. But the end was so exhilarating!

When she watched the Great North Run on TV a couple of months later, she sobbed all the way through it. She knew she had to do it the following year. She enjoyed the preparation and the depth of friendship and trust that came with that. When she arrived at the start, she met a young girl in an HD running shirt like herself. She was running with her whole family and was keen to introduce Becky to them. They all chatted and had photos together before the start of the race. Becky found this emotionally draining and hard to process with all that was going on. It was like a sign. From the start, the whole race was not at all what she had expected. She didn’t enjoy any of it or find any of it easy. It was hot and every step was a struggle. As she crossed the finish line, she expected to feel elated, but all she felt was numb. However, by the time she got home, she was elated and knew without a shadow of a doubt that she wanted to run again. She wanted all the positive effects of running in her life – feeling connected with living, achieving something, feeling fabulous, focusing in that moment on that one thing.

And so running will continue. Not distance running any more, but maybe a 10k just for fun next year. Trying to build up a bit more speed. It’s great to see how Becky’s found her thing.

Becky is amazing. And here are some more reasons why.

She’s not frightened of change. She believes you have to face it and not avoid it, however hard that may be.

By her own admission, she has a sunny nature which she’s very grateful for. If she feels low today, she knows she’ll be fine tomorrow.

She’s grateful for being brought up in deprived areas (her dad was a vicar) because it helps her find perspective and feel comfortable in any setting she may find herself in with her work.

She admires and learns from the resilience and coping strategies of the young people she has the privilege to work with.

She feels privileged to come alongside people in their tragedy and sees tragedy as a way to peek into your own soul and into the souls of others.

She knows that life isn’t just about the HD diagnosis and that everything else is going on as well at the same time.

She feels lucky to have two lovely friends in a similar situation to her own who really get it.

She’s hopeful about the HD research that’s going on into gene silencing.