About a year ago, I made the desicion that I was going to do something special for my 40th Birthday.  I’m not big on birthdays, have never had a party (ever!!) but felt like this birthday was significant.  I spent weeks pondering what to do or where to go, to have a family thing or to include friends or better still include a bit of both.  Right from the off, my birthday would be indulgent but very much about making other people happy, giving people some fun memories.

Eventually the choice was made…….A beautiful converted chapel, Dales Chapel, was booked and 13 gorgeous women invited to join me for a weekend of complete indulgence.  Now I’m not going to lie. I thought I would invite all these women and they would very kindly refuse, finding some excuse to be anywhere but with me in the middle of the school holidays……But no. They all said yes. I was completely thrilled and amazed and super excited. 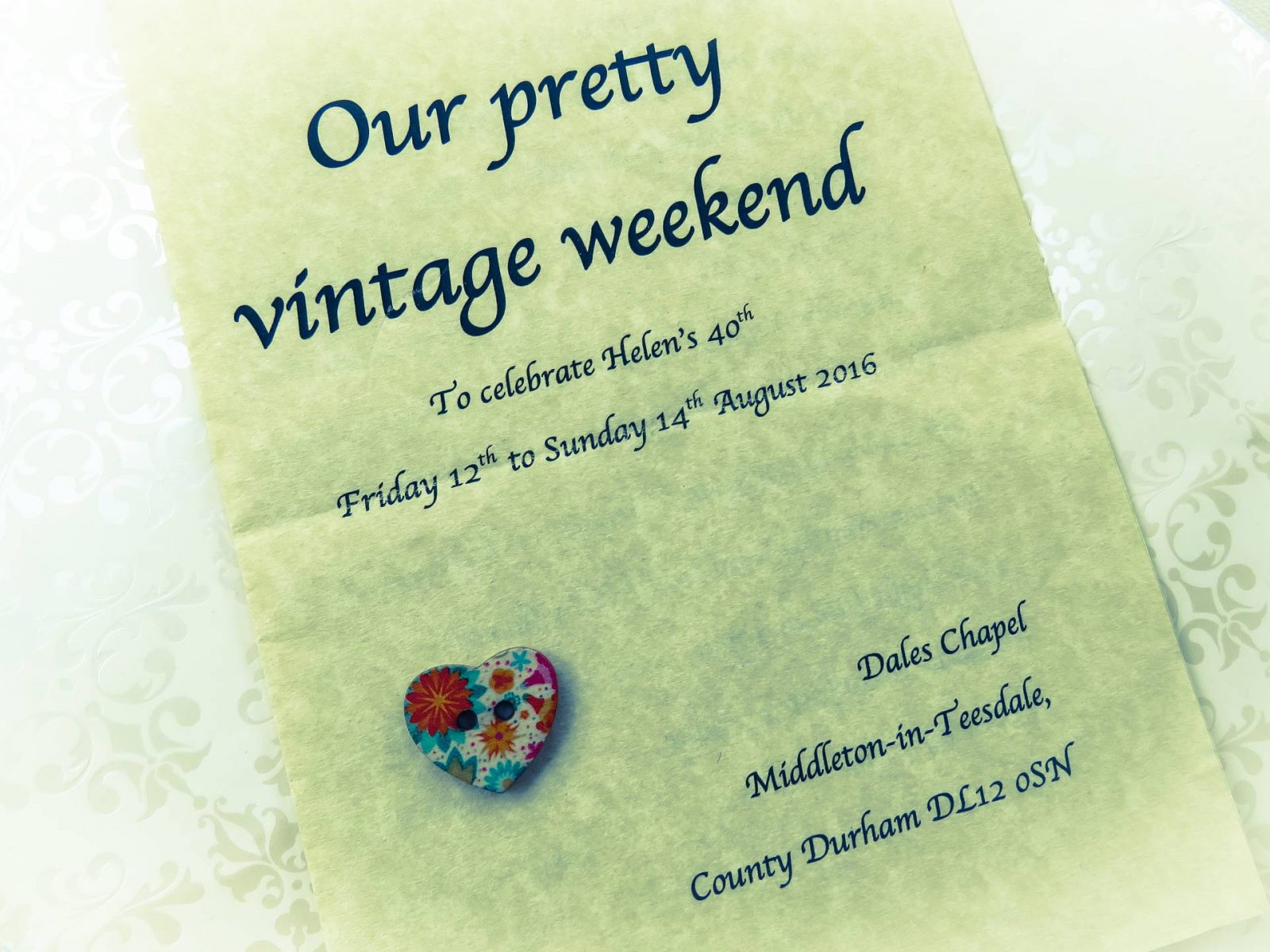 Now I know that I have a tendency to become slightly obsessed about things, especially when I’m excited, but I made the decision to not make any other plans until we had got Christmas out of the way………I wanted everyone to be focused on MY party.

I mulled over lots of different themes, 70’s, boho, flapper……..I even tried to fool the girls into thinking it was going to be a Star Wars party for a while, but eventually I decided on a Vintage Tea Party, and at Easter, we all got together to start organising.  Now I’m not one for being told what to do, but with so many of us I felt it was important that nobody got left out.  In the group, there were lots of close friends but also those who knew others less well.  With the help of Helen R, we allocated rooms and then divvied up the meals.  Nobody was going to get left doing all the washing up. Everyone would be part of a meal, start to finish, then they got time to enjoy the next part.  I loved that within the meals were women that never really had had the need to work together in the past.  Mind, who was to say this would even work? 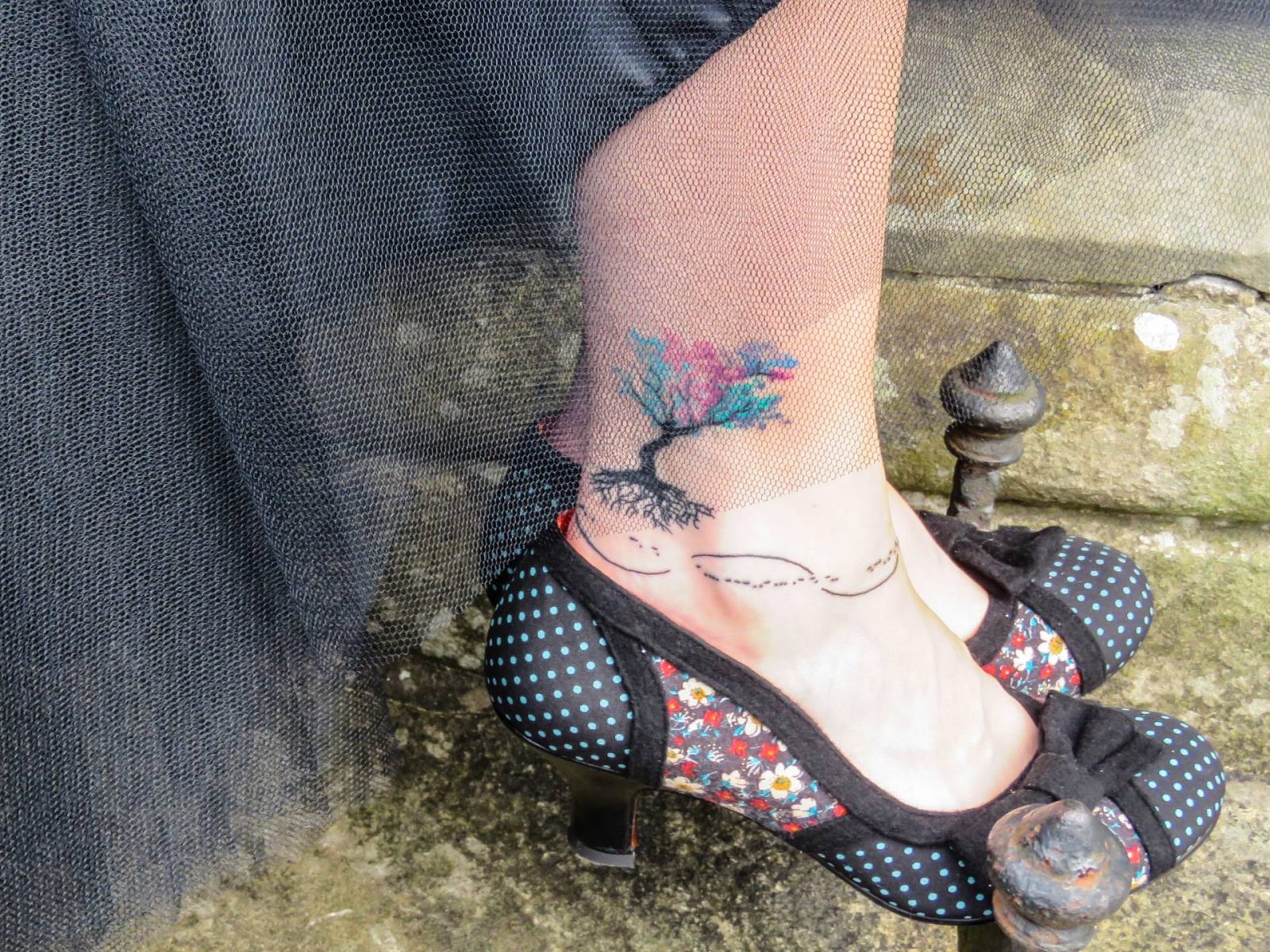 Right from the beginning, I knew that my party outfit was going to be very important and it was. I was beyond excited about making it happen. It was going to be all the little things that made the difference.  But I wanted everyone to feel the same.  Dress code was……Something that makes you feel amazing, pretty, girly and feminine.  Now there were ladies in this group that I have never ever seen in a dress…..I mean we are all going to and from school and church in our normal everyday clothes.  This had to be special. It was the only thing that I was adamant about.  You see I thought about it all, and as much as this was my party, I really wanted all these women who had chosen to spend time with me to have the best time ever, to feel special and different from the everyday.

As the weekend got closer and closer, my house became fuller and fuller of all the things I needed to make it work. Homemade drinks with little bottles to put them in, paper flowers all ready to be unfluffed when we got there, shoes, skirts, sweetie jars, napkins……..honestly my house was full to bursting, there was no escaping.  I even set about making candles in teacups as gifts for my guests.  But as the time grew closer, my nerves began to show……What on earth am I doing?  What if they hate it? What if they all cancel? What if they get bored? I am going to let everyone down and it’s going to be a disaster……….I don’t think I’ve been so churned up for a long time, even having some meltdown about my tiara on the morning we left, and I know it was all nerves. Maybe that’s the reason I don’t do parties…

Anyway there was no turning back now……we pushed and shoved and crammed everything we had into the teeny car that would take us on our adventure and we were on our way…………. 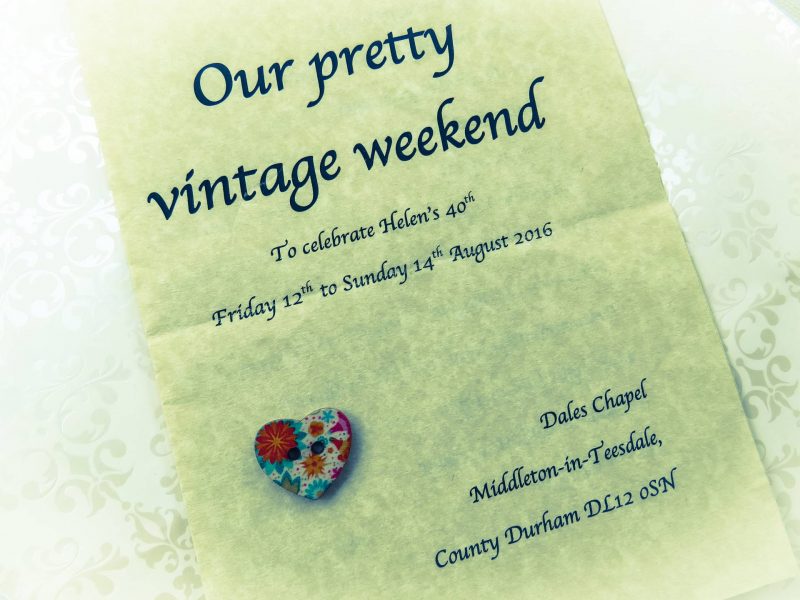