My living room is the one room of my house that I’m pretty content with the way it is.  There’s not much I’d change right now. I love the colour of the walls: duck egg blue. You really can’t go wrong with duck egg blue. There’s something so calming about it.

I love that there’s a real mix of the old and the new. Each item that catches my eye takes me back to where and when I bought it or who gave it to me as a gift.

As I was giving my living room some much-needed love and attention this morning ie. cleaning, I pondered over each item and decided there and then to share with you some of my vintage treasures.

I have no idea what drew me to this little plate, but as soon as I set eyes on it in a charity shop in Whitley Bay, I knew that I had to have it. It was remarkably out of character for me to be attracted to an item like this, and the friend I was with just laughed at my choice. To me, it speaks of innocence and childhood. It’s a tender scene. I like to imagine the story of this fine bone china plate: I like that it has been pre-loved. And it still makes me smile.

The photo of my dad

This is my dad as a young boy, taken over 80 years ago and still in its original frame. He used to tell this story how one day, he and his parents were up in London and a photographer approached them on the train and asked if he could take some photos of this lovely young boy back at his studio. And they went! I can’t believe that of my grandparents! He was proud of this photo, I think, and rightly so. He used to tease me for having it up in my living room but I think he was secretly pleased. I hope so.

These are some of my husband’s toys from when he was a little lad. Little Ted was bought by one of his aunties. He had Big Ted too back then. He wrote 4427 on the wooden train when he was about 8, because that was the number of the Flying Scotsman. The egg cup was bought by one of his mum’s friends on a trip to Denmark. The figure carried a little spoon in one hand and a little bucket of salt in the other hand.

Again, these came from my husband. His grandma moved into a bungalow with a huge lounge in 1972 and he remembers about twenty of these Hummel figures on the mantelpiece. One of his tasks as a kid was dusting all these little characters. He broke one once when he was running around and got into big trouble!

As a child, I used to read and read and read. I could have kept all sorts of favourite books from my childhood, but these Heidi books meant so much to me. They were my sisters before me, so are at least 50 years old. I was happiest when I was reading and Heidi was such a positive, kind child. I think I wanted to be her.

Remember the pretty vintage weekend we had last year for Helen H’s birthday? Well, she gave a candle in a vintage tea cup to each of us as we left. It’s such pretty cup and reminds me of a wonderful weekend away with friends. I don’t really use tea cups any more. Mugs seem more practical and sturdy, I guess. But tea cups are so pretty and dainty, aren’t they? And sometimes pretty really ought to take precedence over practical.

I used to worry that my home would look like an old person’s house if I had these sorts of items on display. But by hiding them away in the loft, I was depriving myself of the memories they spark in me. I think there’s a balance to be had between the old and the new, and I like my balance. I feel at home in this space, surrounded by family and friends, even when I’m alone. 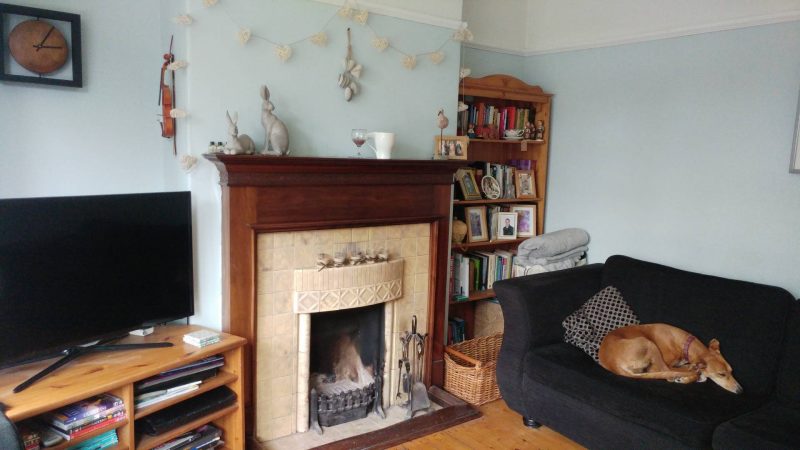