Jo Hutton is the happy, smiley face behind Happy Yoga Newcastle. She’s a yoga teacher. And she’s also a vegan. She doesn’t talk about her veganism in her yoga classes, but was happy enough to have a chat about it for Pretty Vintage Life.

I have never felt comfortable eating animals. I have always had pets and understood that animals can have complicated emotional lives and if they can feel pain and sadness, why would I want to contribute to that when I could just eat something else? It took me a while to get to the point where I was able to go vegan though. I fell off the wagon many times and had some false starts. One day however, I was teaching a group of pregnant women and I was explaining about the hormone oxytocin that is present in the body when breastfeeding. This hormone is commonly referred to as the ‘love hormone’ as it’s present when we bond with each other and it’s also the hormone that causes the ‘let down’ in breastfeeding (this is where the milk moves to the front of the breasts for baby to feed). I was saying this, something that I had said hundreds of times before and it suddenly struck me like a ton of bricks that milk in a mother’s breast is produced by the same hormone that causes us to love each other, that milk is a product of a mother’s love. My own biggest fear is to be separated from someone I love and I just couldn’t be a part of an industry that separates mothers from their babies anymore. After that, I decided to do an experiment of a month of eating vegan and I found it really easy. I can’t imagine going back to eating animal products now.

2.  Are you vegan because you’re a yoga teacher?

I was a yoga teacher for years before I was vegan and I never bring my veganism into the studio. It’s none of my business what my students eat. I’m there to offer the teachings of yoga to my students, so they can decide which bits they want to take and how to interpret it. I think I would be vegan even if I wasn’t a yoga teacher. I try to live my life in accordance with the yamas and niyamas of yoga and for me being vegan is a logical expression of ‘ahimsa’ (to do no harm). I would hope I’d try to do that even if I wasn’t a yoga teacher and before I was vegan, I tried to live my life that way too. It has helped me personally with my yoga practice, because it was something that was making me feel conflicted before and now I’m not, so my mind is more peaceful than it was before I was vegan, but being vegan hasn’t affected my teaching at all.

3.  What’s the hardest thing about being vegan?

I don’t find anything about being vegan hard anymore. To be honest, I barely think about it unless someone else brings it up.

4.  What’s the greatest thing about being vegan?

The best thing about being vegan is when new vegan places open or somewhere launches a new menu, also feeling part of something. There is a really bustling vegan community and it’s such an exciting time to be vegan.

My absolute favourite meal is the same as before I went vegan: it’s good old pasta with tomato sauce. I love it so much I could live off it. In fact, when I was a student, I did. I only have it once a week now on a Sunday, but it’s my all time favourite comfort food. I used to cover it in cheddar cheese, but now I just add extra veg and it’s just as nice.

6.  Where’s your favourite place to eat out?

I eat out so much, it’s my favourite thing to do. We are so lucky in Newcastle, because there are just so many places for vegans to eat. Me and my sister meet every Friday and go for lunch and we usually try a new place every week and still haven’t ran out of places to go. We don’t even go to special vegan places (she’s a dedicated omnivore), there’s so much choice! This month, we’ve eaten sushi at st sushi, Italian at Zi Zi’s, Turkish at Red Mezze and Mexican at Las Iguanas. We go for places with a lunchtime special, so most of the time, we can eat for less than a tenner a head. 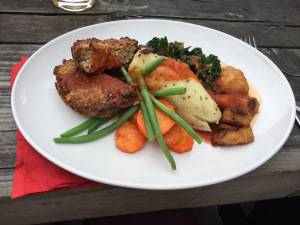 When it comes to dedicated vegan places, Newcastle is spoilt for choice. My absolute favourite is definitely The Ship Inn: it’s a must for everyone. Their Sunday Dinners are just simply the best in the North East.

7. How do people respond when you say you’re a vegan?

Most people are lovely and are sometimes a bit curious about it, so ask some questions. You get the odd person who is quite confrontational about it, but when they see you’re not going to argue with them, they usually get bored. I am happy to have conversations with people about it, but I won’t just argue for the sake of it. I’ve had a few people getting really angry when I say I’m vegan, but I think that reflects more on them: if they can get angry because someone is deciding not to eat meat or dairy, then they probably should examine in themselves why it makes them angry.

8.  Do you think vegans have a bad press? Why is that? Are you one of ‘those’ vegans?
To be honest, I think anything that goes against the grain of societal norms is going to get a bad press. The personal is political and when someone decides not to partake in an industry because they think it’s unnecessary and cruel, then obviously that is going to upset some people, because even if they never talk about it, the simple action of abstaining is seen as a judgement and people don’t like to feel that their actions are being judged as unethical. Most people never question where their meat comes from and very rarely make the connection between the meat on their plate and an actual animal, I think this is natural when we live in a world where we are so detached from where our food is produced. However, I think it’s strange that people get so upset when a vegan tells them something that makes them see the connection, I just don’t understand it. Either you’re not bothered by it so you don’t mind seeing and hearing about what happens in a slaughterhouse, or you do mind and you should try and stop contributing to it. I think that people should be informed, so that they can make clear decisions about what they eat. Once you have all the information, then it’s up to you what you do with it, but I’m always stunned by how many people believe they are eating meat from happy animals skipping around the fields. I personally will only talk about it when I’m asked, but I am happy that campaigns such as ‘Veganuary’ and ‘Go Vegan’ are becoming so prominent, as an informed public is a powerful one. I genuinely believe most people care about animals, you just have to look at the outrage against the dog eating festival in china to see that.

9. Why did you start your vegan blog? Are you looking to ‘convert’ people?
When I started my blog, it was just to accompany my one month vegan experiment. I wanted to document how I found it to be vegan for a month, mostly because when I had tried to be vegan in the past, I had failed, so I decided if I said in public I was going vegan for the month, then I had to stick with it. I genuinely thought I would do it for a month, miss cheese too much and then go back to eating meat and cheese with a funny story about how I have no will power. However, I didn’t find it as hard as I thought I would and as the month went on and the further I got from eating cheese and meat, the weirder it seemed to me that I ever had done to begin with. When the month was up, I knew there was no going back.
Like I said earlier, I eat out a lot and it became a natural progression for me to take photos of the places I ate out at so people could see how easy it was. I think lots of people would like to try it, but are worried about it being too difficult and I wanted to show that not only is it easy, but it’s cheap and fun too.
I’m not trying to convert people, but I think there are lots of people who are curious and are looking to see what’s on offer and how you would practically do it, so it’s good to show them.

10. How do you think the perception of food is changing in the UK (if at all)? Do you notice any shifts in thinking? What are the issues around food in Western society in your opinion?
I’ve seen a massive shift towards veganism, even in the year and a bit since I went vegan. It has become so much easier. New places are opening all the time and supermarkets are competing for the vegan pound, so products are hitting the shelves pretty much monthly. Last month, Tesco launched its new vegan cheese range, which in my opinion is the closest thing to cheese we’ve had so far. It’s really exciting and the products are only going to get better.
Veganism isn’t going anywhere. It’s sometimes dismissed as a diet or a fad, but I think there’s some confusion about veganism and clean eating. In my opinion, clean eating is dangerous, as it demonises certain foods and creates a dichotomy between good and bad foods, which can lead to feeling anxious around food and could spark disordered eating. Being vegan is a lifestyle where you try to live as much as practically possible without exploiting animals. I’m always surprised when people say that my diet is restrictive, because I don’t feel that way at all. In fact, there’s very little that I ate before I went vegan that I don’t eat now. My relationship to food hasn’t changed at all. I just don’t eat stuff that comes from animals.

I am not a vegan. I’m not sure I ever will be. In the yoga world I spend much of my week immersed in, there are many vegetarians and vegans. I feel I’m being nudged in that direction, but as I say about so many things, I’m not sure it’s ever going to happen this side of heaven!

I am thinking carefully about what I eat however: where it is sourced, what effect it’s having on the environment and on me, the reassurances about the meat and fish and eggs that I buy. It’s been good to talk to Jo and broaden my perspective still further.

She certainly doesn’t give the impression that she’s suffering for the cause, does she? She looks like she’s having the time of her life!

If you’ve enjoyed reading Jo’s responses, you discover more from her in the Geordie Vegan Blog. Don’t worry if you’re not a vegan: Jo makes it clear that all are welcome.

Whether you’re a herbivore or an omnivore please feel welcome here.

Which is exactly how it should be.